Why is Climate Action important

Climate change is one of the most severe issues humankind faces currently. The climate crisis has been acknowledged to be an issue for the health, prosperity and safety of humankind along with other biodiversity of the planet. However action and commitment to combat climate change has not been explored to its fullest potential. As a result of climate change, temperature has risen exponentially while the ecological imbalance it leads to has affected the rain cycles, weather etc while also causing calamities like hurricanes, flooding etc.

According to the Sustainable Development Goals Report-2020, 2010-2019 has been recorded as the hottest decade known to mankind. It is represented in the drastic changes in the weather patterns, forest fires, hurricanes, increase in sea levels etc.

UNDP has stated that the greenhouse gases emission is at least 50% more now than it was in the 1990. And the economic losses incurred due to climate change amount to hundreds of billions of dollars, with the human life loss being 2 billion or more. However the investment required to ensure a low carbon development and resilience building, estimated to be at least 100 billion USD annually, is not being met efficiently.

BBC News (Shukman, 2021) has reported the UN bluntly calling this inefficiency out with respect to the slow pace of cutting down emissions by 45% by 2030. While it seems this target won’t be met, additionally it is predicted that the emissions will rise by 16%, which spells trouble.

Climate change also affects vulnerable groups who are more prone to irreversible damage, loss of livelihood and inaccessibility to disaster management and other facilities. And when there are huge scale damages, then conflict arises out of need for resources which might become scarce due to climate change, such as water etc. 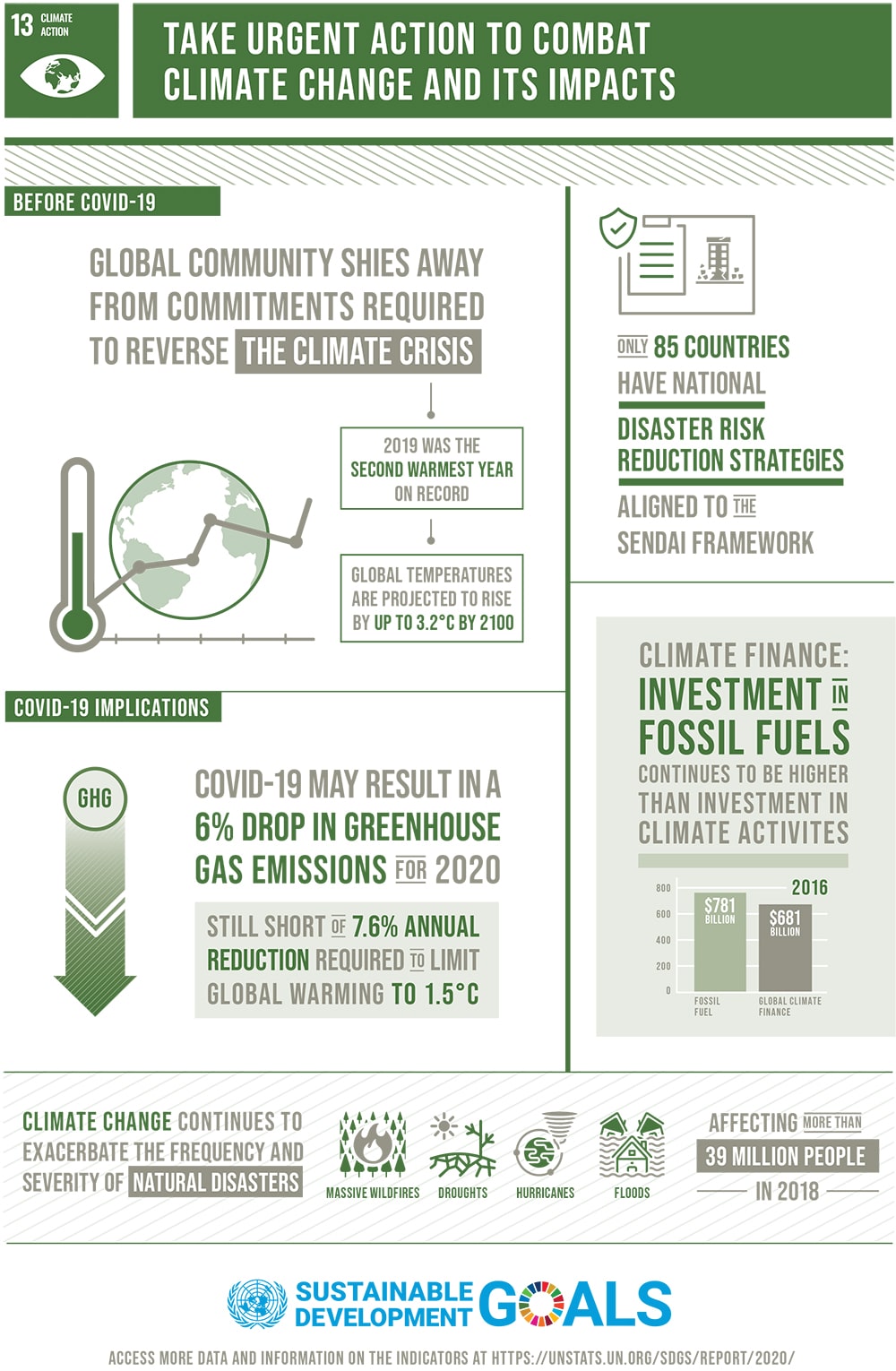 Understanding the root cause for Climate change

Climate change is a phenomenon that drastically changes weather patterns and affects the ecological balance of the world. It is a result of anthropogenic activities wherein human centric development actions have led to exploitation and endangerment of the planet. Carbon emissions, which come from various sources, have increased in the past few centuries since the industrial revolution began, and mass production became the norm.

The carbon emissions coming from human activities has led to global warming, the increase in temperature around the world, which not only comes from retained heat due to increased carbon dioxide in the atmosphere, but also from the slowly depleting ozone. Increased temperature in turn dislocated the ecological balance giving rise to calamities like hurricanes, forest fires etc. It also disturbs the water cycle as can be observed with recent uneven and heavy rainfall which leads to flash floods and landslides.

The rise in temperature also leads to melting glaciers which increase the sea level threatening coastal areas and island nations with the danger of submerging.

However, climate mitigation is possible. The coronavirus pandemic observed a decline in human activity thus gradually improving the condition of the ozone layer. However this doesn’t mean that mere slowdown of human activity can reverse the damage inflicted by climate change and thus more willing action must take place. Investment in climate change is still low, and requires greater participation from all stakeholders. So far, major areas of investment have been in the area of renewable energy by the private sector.

UNDP urges for investment to be made to make vulnerable people at the forefront of climate change, more resilient and use these people as leaders of climate mitigation. The Paris Agreement has also prompted investment in technologies for natural resource management and disaster resilience infrastructure.

Since climate change is an imminent issue, various organizations have formed and began working towards climate mitigation ardently, especially strengthened by the increasing importance given to the issue by the UN, as solidified with the Paris Agreement. United Nations Framework Convention on Climate Change (UNFCCC) is a UN entity that has been formed to collect and analyze climate change data and mitigation progress to formulate action plans in the combat against climate change. Climate Action Network (CAN) is an international network which works across over 130 countries partnering with 1300 plus environmental NGOs that promotes human based action in the local communities level and government policy making level. Green Climate Fund is an organization established within the jurisdictions of the UNFCCC which functions as a financial mechanism to support the most vulnerable communities in the most vulnerable nations. Environmental Defense Fund is a US based nonprofit that works towards the law and advocacy of environmental issues while supporting ecosystem preservation and sustainable livelihood building. The Pacific Community is an organizations with 26 members, 22 of which are pacific countries and territories, that focuses of sustainable and resilient development of the pacific region.

What youth can do as a TAL transformer

Climate change was a distant phenomenon in the past few centuries. However we can face it’s impacts directly today, whether it is experiencing heavy rainfall or floods or forest fires etc. Since the impacts have gotten so close to our vicinity, there is a need for urgent action.

What you as a transformer for the society can do, is use social advocacy, philanthropy and entrepreneurial/business ideas in an innovative manner to provide a progressive direction for reaching the goal. Instances of which are as follows: